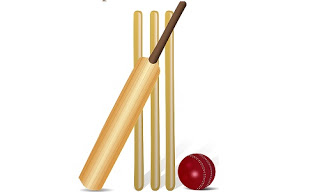 Appeal – The act of a bowler or fielder shouting at the umpire to ask if his last ball took the batsman’s wicket. Usually phrased in the form of howzat (how-is-that?)

Arm ball – A deceptive delivery bowled by an off spin bowler that is not spun, so, unlike the off break, it travels straight on (with the bowler’s arm).

Block hole : The area between where the batsman rests his bat to receive a delivery and his toes. It is the target area for a yorker.

1.  the perimeter of the ground

2.  four runs. Also used to mention a four and a six collectively

3.  the rope that demarcates the perimeter of the ground

Bye – Extras scored in the same way as normal runs when the ball does not make contact with any part of the batsman (bat, protective gear, body parts)

Catch – To dismiss a batsman by a fielder catching the ball after the batsman has hit it with his bat but before it hits the ground.

Caught and bowled : When a player is dismissed by a catch taken by the bowler.

Caught behind : A catch by the wicket-keeper.