Ammeter: It is a device used to measure current.

Atom: It is the smallest unit of matter that can take part in a chemical reaction and which cannot be broken down chemically into anything simpler.

Buoyancy: It is the effect of the upward force (upthrust) on an objective in a fluid.

Ballistics: It is the science of the movement and behaviour of missiles. Projectiles from guns, refuels and slings, bombs, rockets and so forth.

Calorimeter: It is an apparatus for measuring heat.

Calliper: It is a kind of measuring instrument

Decibel: It is a unit of measurement. It measures the loudness of sound.

Dynamo: It is a simple generator, or machine for transforming mechanical energy into electrical energy.

Element: It is substance that cannot be split chemically into simpler substances.

Epicentre: It is a point directly above the true centre of disturbing from which the shock wavers of an earthquakes apparently radiate.

Filament: It is a thin, high resistance wire as in an electric light bulb. 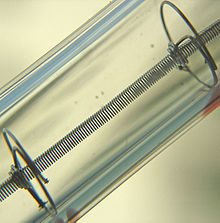 Forensic science: It carries out test and searches for clues to help the police and lawyers.

Galvanometer: It is a sensitive instrument for detecting or measuring small electric currents.

Greenhouse effect: It is a phenomenon of the Earth’s atmosphere by which solar radiation, absorbed by the Earth and re-emitted from the surface, is prevented from escaping by gases, mainly carbon dioxide in the air.

Hertz: It is a unit of measurement which measures the frequency of vibrations.

Hydraulics: It is the branch of physics that deals with the behaviour of liquids at rest and in motion.

Inertia: The tendency of an object to remain in a state of rest of uniform motion until an external force is applied, as stated by Newton’s first law of motion.

Isotopes: These are atoms of an element having the same atomic number but different atomic weights.

Jet lag: It is a state of feeling unwell and exhausted experienced by air travellers when they cross several time zones in a relatively short time.