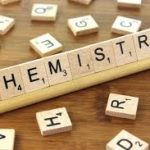 1- Acid – Compound that gives off H+ ions in solution.

2-Base – Substance which gives off hydroxide ions (OH-) in solution.

3-Catalyst – Substance that speeds up a chemical process without actually changing the products of reaction.

4-Density – Mass per unit volume of a substance.

5-Effusion – Movement of gas molecules through a small opening

8-Ion – Removing or adding electrons to an atom creates an ion (a charged object very similar to an atom).

9-Mass number – The number of protons and neutrons in an atom.

10-Neutron – A particle found in the nucleus of an atom. It is almost identical in mass to a proton, but carries no electric charge.

11-Oxidation number- A number assigned to each atom to help keep track of the electrons during a redox-reaction.

12-pH – Measures the acidity of a solution. It is the negative log of the concentration of the hydrogen ions in a substance.

14-Reduction reaction – A reaction in which a substance gains at least one electron.

16-Thermodynamics – The study of temperature, pressure, volume, and energy flow in chemical reactions.

17-Van der Waals equation – An equation for non-ideal gasses that accounts for intermolecular attraction and the volumes occupied by the gas molecules.

20-Combustion -When substances combine with oxygen and release energy.